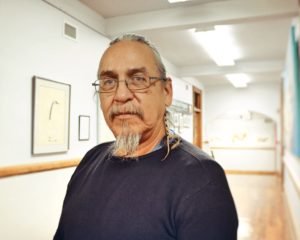 My life as a Haiku-living with intense awareness and having an openness to the existence around us. Concision, perception and awareness. I was lucky enough to have been born at Frog Pond on Six Nations of the Grand River Territory.

I was scooped up like tens of thousands but survived Canadian program against First Nations children. Deprivation, racism, and cruelty were my mentors, while a ward of the Crown. They would later become valuable tools as life skills.

The racism subdued and enraged me.

I met my first marine in Massachusetts when I was seven. After a terrifying year, I was returned to Canada. He and his wife had their problems, and I had mine.

The purpose of youth is to learn from adults, if you only know bad people…

I looked for unrealistic role models on tv and emulated hard drinking through bullies- the kind I met as a child. After adolescence, nature prevailed and I married and had a child. It was a dismal cultural failure. My culture had been stripped and my soul was lost. I had been commandeered by alcohol. I drank my way through early adulthood being everything I was trained to be. I was smart enough to achieve, but disrespect taught me to hate myself.

I blamed my mother, I was a misogynist. When my son turned 14 I stopped drinking because I told myself I would not be his excuse to ruin his life.

Under the Rae government, I fell into a job at the Ministry of Attorney General of Ontario. Some of my best role models and favourite people worked there. Others were there just to pass the time,

Sober, I started helping people who were defeated by things that were bigger than them and stared identifying causes of misery. I remembered beatings at different places and revisited them. Places that had long since been torn down.

Thirty years after I left the Children’s Aid, I found out they had concealed thousands of dollars I should have received when I was eighteen, when I was tossed penniless into the street. While still in the government, I met a group of like-minded men who had attended Native Wellness Conferences through the course of their jobs and were interested in First Nations Men and how to regain their culture so we could heal ourselves. I helped form the Native Men’s Wellness Group and through a series of Wellness Conferences, we introduced a self-help network that functions to this day. I volunteered to help feed the homeless during that time. In 2005, the Toronto police had killed their 10th homeless person and I asked the officers I saw everyday where I worked, and asked why they had to kill when I knew the province spent money to hire British SAS to teach them how to disarm.

They complained to my boss and I quit shortly thereafter. I went back to Six Nations to regain my balance and when the occupation at Kanestaton started and the cowardly act of the OPP, pepper spraying and putting boots to women and children while lawfully protesting occurred. I went down to help. I cooked 90 days straight 14 to 18 hours a day and the government walked away from the negotiations.

The occupation is still going on. Terrorists were encouraged to harass the peaceful occupants. A life after 5 years of trying to keep the peace with little support and spent 1000 days in the woods.

Now an elder, I appreciate the Great Circle and everything in it. The more that all people realize their place in the circle the more fearful the church and government get. Chiefs eat last, everyone matters. Food is the gift of the Creator.

Our community taskforce is a beautiful gift of community and I am proud to be part of that beauty.

Likes:
0
Shawn Johnstonprevious
We use cookies to ensure that we give you the best experience on our website. If you continue to use this site we will assume that you are happy with it.Ok